Harvest your best ideas with a long-term to-do list 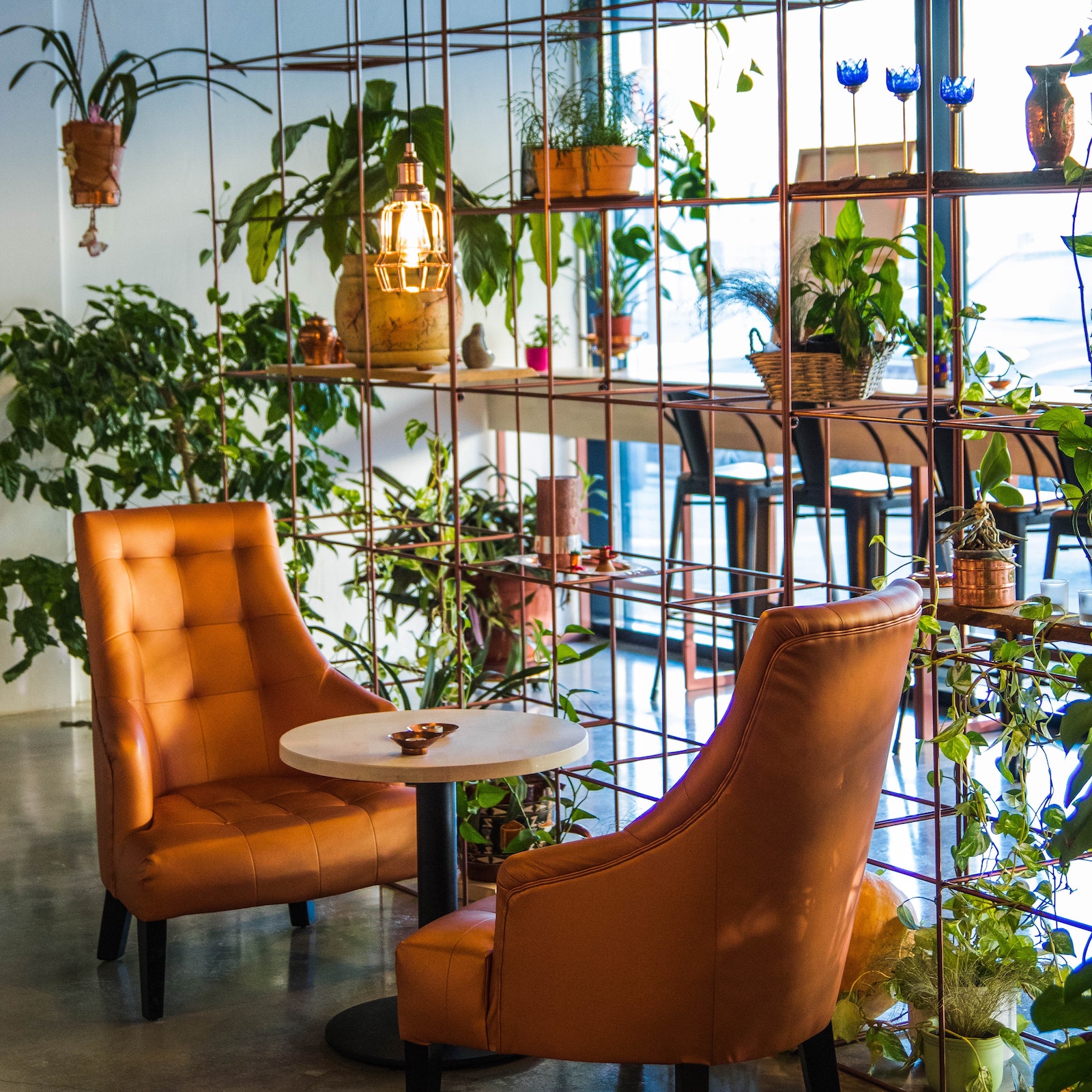 Imagine having the perfectly calibrated to-do list. It's stuffed with high-ROI tasks that will help realize your long-term goals. Each task is researched and contains clear instructions to act upon. It is always 25 items or less, so if a task isn't being worked on today, it's out-of-sight. Any time a new idea kernel popped into mind, the list would snare that idea and put it into writing, so as to begin incremental refinement until it's ready for action.

If you aspire to craft your own "perfectly calibrated to-do list," Amplenote can help. When combined with high motivation, a polished list of actionable tasks offers the chance to get an edge in any competitive sphere. Every day you think about a task is an opportunity for your present-day self to improve the task by 5% -- or dismiss it﻿. Amplenote's Task Score﻿ captures the wisdom of your past selves, to keep nudging your attention back toward your best ideas until they're too good not to work on.

There is a catch. To reap the benefits of repeated attention requires pushing toward a showdown with the items that get stuck on your list as it ages. We refer to these old list items as "barnacles﻿." It's a rule that nobody wants to work on their barnacle tasks -- that's how the damn things became barnacles in the first place. And yet, just as some animals have evolved the ability to digest barnacles﻿, so too must an effective long-term to-do list evolve a mechanism through which its barnacles get processed.

If you have six minutes to read the rest of this, you'll learn why we believe "the perfectly calibrated to-do list" happens by keeping long-term lists where ideas are captured and refined, then dismissed or completed. Then we'll offer three ideas to cope with the detritus that can make the perfect to-do list such a drag to open up at the beginning of the day.

linkCollecting the best ideas from all past selves

Pinpointing "the highest ROI things to work on today" from hundreds of past tasks you've created is neither fast nor easy. Anyone who thinks they can sit down in January and create a list of goals that will still be relevant in 12 months is naive about how interests drift﻿. To build your perfect, high-ROI set of tasks, one must ply the human tendency toward change to one's advantage, by continuously working from the same list and making its contents just a little bit better every day.

To some degree, every day that you revisit a task, you're seeing it with a fresh set of eyes﻿. Doubly so if you've hidden the task (!hide in Amplenote) for a week or month before seeing it again. When you keep a long-term to-do list, it's like each of your ideas gets a team of 10 experts assigned to brainstorm improvements. Those "10 experts" are versions of yourself, on different days -- as you learn more about the idea, and dream about its possible outcomes from the different emotional states you experience.

The chief force working both for and against the long-term to-do list: it forces one to be consistent with their past judgement. In this regard, it's like when we set aspirations for "healthy eating," "exercise," or [insert your New Year's resolution here]. Things that you know you ought to do, so you delegate them to your future self and walk away proud for what you've "done." Anyone who sets resolutions is hastily introduced to the difference between setting an intention and following through on said intention. An Amplenote task list is always nudging its user to reconcile unpleasant truths about the chasm between "present-day intentions" and "what future-self will actually follow-through on." 🙁

If you can't learn to confront your to-do list in all its messy randomness and annoyingness, then you face an even-worse problem: that you avoid working from a consistent list altogether. How often do you create new to-do lists and "lose track﻿" of old ones you'd created? Every day? Every time it happens, you're potentially leaking precious ideas, and introducing randomness into whether you'll follow through on your best past judgement. Wasting past insights squanders potential. To unify "intent" with "current existence" requires constantly abiding your best past judgement.

The hardest situation for long-term lists to handle well is when one adds a task that's neither Urgent nor Important. This type of task is so easy to let slip through the cracks, even for productivity experts I've interviewed. It's a shame, since many of the coolest and most audacious ideas would never have been considered "a priority,"﻿ but could transform long-term fortunes if their potential were fully understood. If you hope to pinpoint which of your quirky ideas could transform your long-term fortunes, you must first get off the Urgent task treadmill﻿. Then you have to figure out how to keep visiting the lists where weird ideas get buried.

Hopefully we've advanced sufficient arguments in favor of not letting your past intentions get lost or ignored, even though they will tend to be annoying tinged with unrealistic optimism at times. Being gentle at first with your fledgling ideas is essential to cultivating the best ones.

How can one hope to keep working on an old task list, even when it starts to accumulate barnacle tasks? Three promising angles are to make the list exciting, light and flexible.

What you're excited to work on is most often something you've newly discovered﻿. It’s not some directive that you issued to yourself 9 months ago, which at this point you're quite sick of seeing on your list. Inspiration, and thus energy available, is maximized when we're working on a task that feels fresh or inspiring.

By focusing on the tasks that feel most exciting (thereby ignoring advice from our previous posts﻿ 😈), you'll have a natural propellant to get a quick start on the day's tasks. In Amplenote, when you need a task to get yourself going at the beginning of a day, click into Jots view mode﻿. There, you'll start with a clean slate upon which to capture the most interesting tasks that come to mind right now.

To build up momentum, start your jot with some easy tasks you're looking forward to

That's a great start. After you've created a few inspiring tasks (and before starting them), go back to your main to-do list and use !copy to copy a barnacle task or two into the daily jot. If you can just complete 1-2 barnacles each day, consider it a win. 🏆

When you work on recent tasks, you build up "productivity momentum." This ups the chances you'll finally start (or dismiss) the barnacle tasks you had once decided were high ROI. 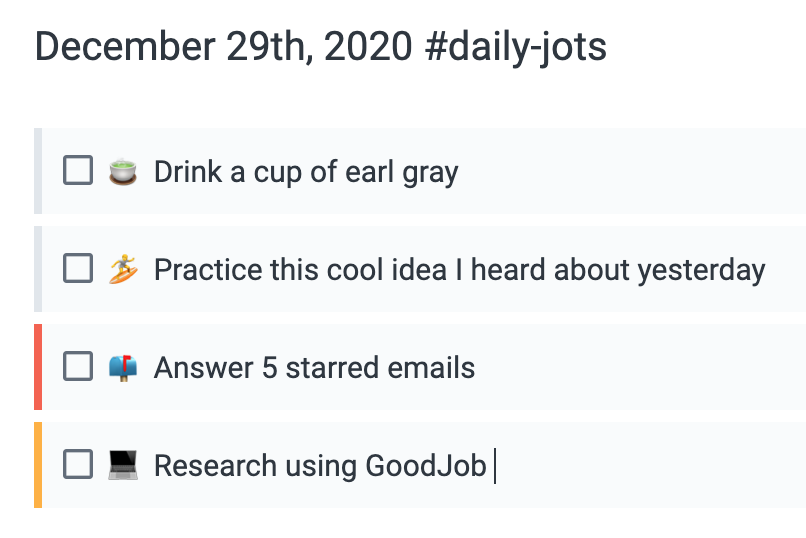 After you've had a little fun and checked off a couple todos, you can roll straight into the reds and yellows (the tasks you've been procrastinating on)

tl; dr Start the daily jot task list with exciting, recent ideas before you dig into the "hard tasks" you ought to be working on.

The benefit of keeping a list "light" is less about removing barnacles, and more about keeping the list a fertile ground for new ideas -- so you continue to look forward to planting new ideas in it. To this end, we recommend avoiding rules about "how" or "where" new tasks get added. Absent rules, tasks can gradually evolve from half-baked scrawl to precisely-structured calendar event. It's a waste of time to apply labels or hierarchy to a new task when you're not even sure if it's worth a damn. 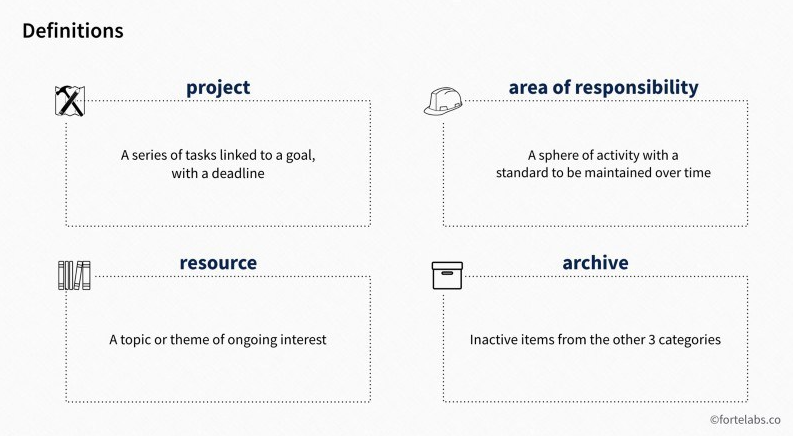 Using PARA, tasks are expected to be unambiguously assigned to one of four buckets

And to be clear, there are plenty of testimonials that will attest that PARA has transformed its adherents lives﻿. Still, we posit that "rules" and "systems" are emotional opposites of "inspiration," "energy," and even "creativity." The problem is that "more rules" means more friction, more remembering, and more time spent on process instead of getting stuff done. To end up with a "net neutral" impact on productivity, a productivity system has to be really good just to overcome the intrinsic liabilities of adding more rules.

The perfect to-do list needs to be fun to use -- whether you have the time to “do it the right way” or not. You can't be expected to read the manual. This is what makes table-based task lists problematic: the more precisely you specify all the columns that seem to matter, the greater the weight of adding or deleting a row. In time, the table-based task list grows too intimidating for our measly human willpower. It's easiest to just scrap the list and start anew, forfeitting all the wisdom that had been sowed in the table-based list.

Who wants to add the next row to a table like this when it's tantamount to creating a Jira?

After 20 years of failures and countless abandoned to-do lists, I feel qualified to conclude that the "perfect productivity system" is context-dependent. Consequently, the rules that govern your perfect to-do list will vary from year-to-year.

If the most effective productivity system really had to be learned, then it would need to be re-learned every year or two, because interests drift -- alongside job responsibilities, project interests, and available software. There's a good reason that most people's go-to task list is their phone's default notes app: it's fast, with zero friction.

If you want to optimize productivity, you can't expect to eagerly consume the orders from your past self that was dead-set on how cool it would be to create a Tesla museum﻿ or whatever. The longer a task stays on your list, the greater the potential for interest drift to drag it down into the watery depths of irrelevance. You've got to stay realistic about what's still interesting enough to be worth the effort, and remain willing to update goals.

In Amplenote, we encourage freshening up stale goals through a few paths:

1. Use the !hide Task Command﻿ to set aside tasks you can't work on now. Often, when tasks pop out from being hidden, they're no longer as compelling as when they went in. Especially when you hide a task for 60+ days. If a hard task loses its luster, it's sometimes possible to reformulate it into something less ambitious. But if not...

2. The Ctrl-Shift-Spacebar hotkey will dismiss a task from your list﻿ while awarding you 50% of the Task Score for the dismissed task. If you want to optimize your life around your completed Task Score, dismissing tasks is a great avenue to cash in points for not doing any work. 🙃 📈

3. Create subtasks﻿. When you have a task that has aged into a "red bar territory" (high Task Score), a common problem is that the task is insufficiently actionable. Subtasks﻿ are a great way to expand upon your original idea. Smaller, bite-sized tasks, with a clearly defined starting point, give you less excuse not to get started.

The secret to unlocking your inner Elon Musk is to collect your past wisdom, refine it over time, and leverage your past selves to your present advantage. There are pains to pursuing a long-term list -- it slowly forces you to become consistent with your past intentions -- but the gain outweighs the pain when you witness your dreams slowly becoming realities.