Hello and welcome to twice as many daily active Amplenote users as three months ago! There's never been a better time to hop aboard the Amplenote bandwagon. Our development continues at a torrid pace, with more than 20 user-requested features launched just since the previous blog. 😅 This GitClear Chart Glimpse﻿ of Amplenote's development shows the contours of this quarter: 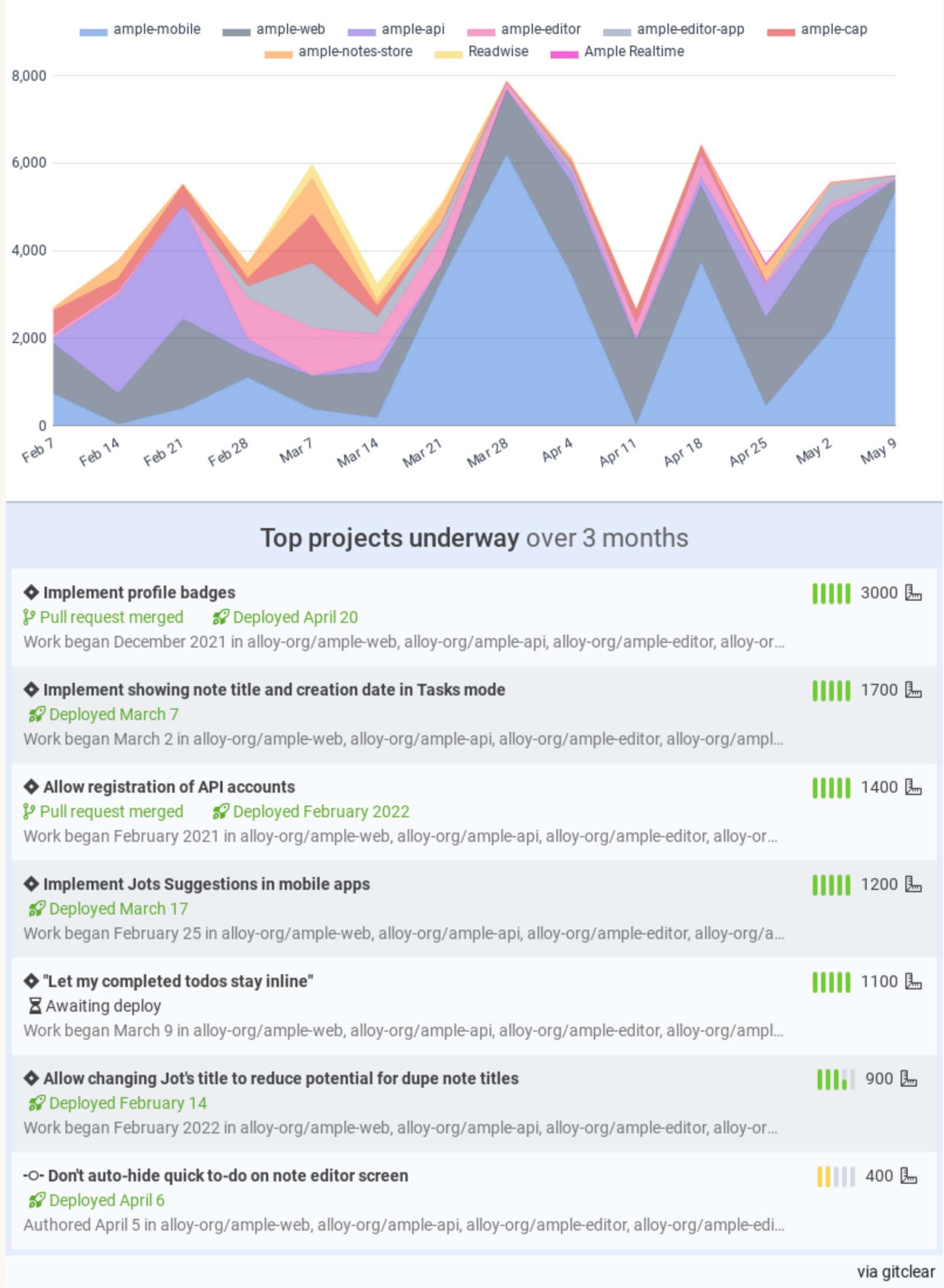 That's going to be a lot to cover in one blog post! Thankfully, our new "Table of Contents" feature﻿ makes it easy to sum up what's new from the last couple months:

🎨 10 color themes to choose from on web for Pro+ subscriptions﻿

Yeesh! It's quite the list for a couple months time, huh?

New goodies that went live since the previous blog post.

For both developers and non-developers, IFTTT is a great way to add tasks to Amplenote via Siri, Google Assistant, Amazon Alexa, and lots more. Check out the integrations available for Amplenote on IFTTT﻿.

link🎨 10 color themes to choose from on web

We now offer up to 10 options (previews of each on the help page﻿) for Founder subscribers to curate an Amplenote experience to match their aesthetic preference:

Themes are progressively availed with higher subscription levels. We intend to wrap up & launch themes' mobile counterpart within the next couple weeks. Your selected theme will sync across all devices, though light/dark setting will remain specific per device (we recommend leaving it as "Match system" to let your system dictate light/dark).

Public profiles give users a way to connect and collaborate on projects. They also let users showcase badges﻿ earned for various Amplenote-related achievements. People like Isaiah Centifanto﻿, who help create content that teaches Amplenote to others, can now receive the recognition they deserve.

For subscribers at Pro and above, it's now possible to insert a table of contents into a note by entering {toc}. You can see an example at the top of this very blog post, and probably every blog that will follow it. 😉 We are not marking the upvoted feature as complete yet as we are considering﻿ the possibility of a v2 Table of Contents that will automatically update.

The Amplecap UX has gotten a total overhaul since our previous post. Now, you don't have to remember 8 different hotkeys to control your capture inputs. Instead, just use the keyboard:

In February we launched our Discord server, which is free and open for anyone to join here﻿. We are still figuring out how Discord fits into the overall picture of how we stay connected with Amplenote customers. Since most productivity derives from asynchronous batch processing, the potential for Discord to slow down progress is rife.

Our hope with chat is that we will reach a critical mass where users answer one anothers questions without having to wait for our team to respond to an "official" support inquiry. The jury's still out on whether Discord will offer that for us, but so long as it remains a net positive influence on user adoption, we invite you to join us! 👋

Improvements to existing features since the previous blog post.

Prior to this quarter, our iPad version was a sad, zoomed in version of our mobile app. It didn't support hotkeys, it only offered the one-day calendar mode, and it was so generally inferior that our help page recommended working on an iPad from the Safari PWA.

Now, our iPad version (and mobile apps) offer all the calendar modes: 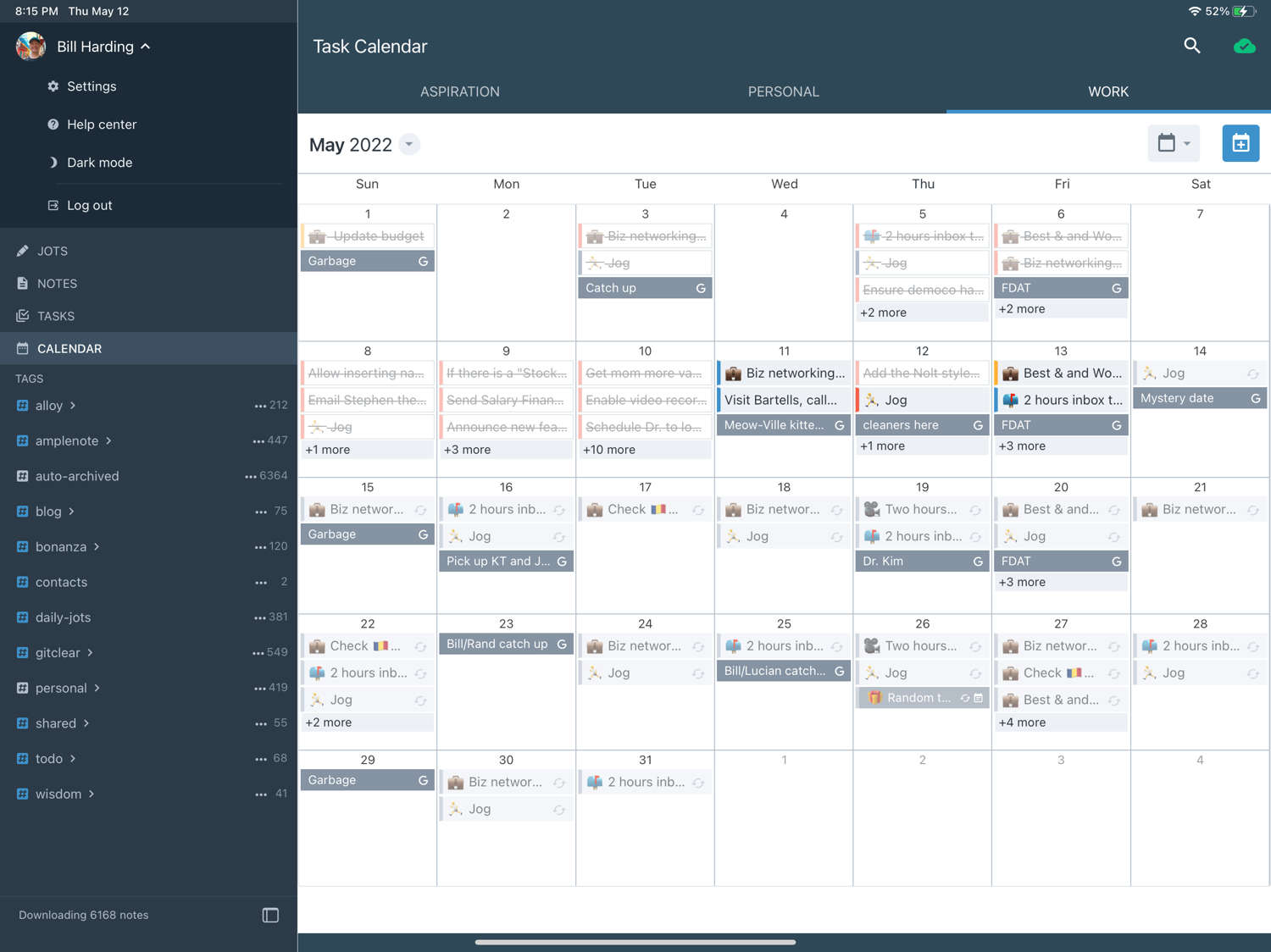 Plus all the features you know and love from the web app: 1-, 2- or 3-pane selection﻿, modals dialogs that let you better keep your context for publishing or sharing; and supporting keyboard hotkeys. We still have another week or so of iPad improvements in the works, but we think it's safe to say that Amplenote on iPad has become one of the most feature-rich free note taking apps available, with full access to all four modes on the free plan (Jots, Notes, Tasks, Calendar). ✨

This one turned out being a lot more work than it sounds like! It required reworking the internal logic for how completed tasks are handled, but after some heavy lifting, we debuted the "Cross out" hotkey / task action / Task Detail option in March. It earned its own help page here﻿. The tl; dr is that if you use Shift-Cmd-Space (macOS) or Shift-Ctrl-Space (on PC), the task that you complete will be left in place.

Along with the update to leave crossed out tasks inline, we also implemented a new feature that makes it possible for any combination of tasks, bullets, and numbered list items to be nested and collapsed within each other. We are unaware of any other app that allows the three types of content to be intermixed in collapsible hierarchies, but we felt it was important since so many users do their brainstorming in outline form.

For users who think in terms of note outlines, there is often a fuzzy distinction between what's "a thought" and what's "a task." That's why we implemented this new hotkey to makes it super convenient to swap between a bullet point and a task. It even works on non-list content -- if you hit Ctrl-Enter on a paragraph/heading/etc it will become a bullet, and if you hit Ctrl-Enter again, it becomes a task. ✨

This is one we heard requested in many emails by those who rely on Task mode. As of this quarter, you can now see for each task the note in which it resides, and the time the task was created, so you get more context to recall the circumstances of a task when it's not readily evident what the task meant absent its note context.

The moment that many people were waiting for hath finally arrived -- a free version of Amplenote for personal and student use is now available from the subscription plan page. This isn't some wimpy plan that doesn't let you sync devices -- it's the fully fledged version of Amplenote with everything a student needs to be their most productive self.

In Jots mode, you can now use the arrow keys to move between content and title for each Jot. We highly recommend using this new nicety when you create a Jot that ends up containing research or other data that you may need to refer to later.

Languages with words that aren't separated by spaces

Subtasks now hidden when their parent task gets hidden

Emoji selector now available on successive emojis. No more pressing space when you want to make a list of emojis 😎👍🎉

Improved handling of three-letter queries in Quick Open, updated Quick Open to allow query to hybrid match the tag and title of a note

Along with this crop of new features, the last couple months have also brought the release of a few new Youtube videos about Amplenote!

Better than Roam? A free alternative for GTD and Zettelkasten ﻿

5 best productivity features that made me switch to Amplenote﻿

Our Line Impact﻿ in Q2 was up about 20% vs Q1, and we expect this trend to continue with more of our team's developer cycles allocated for Amplenote development in Q3. Here are some of the targets we've got our eye on in the quarter to come:

Looking at our daily active users since the beginning of the year,

It's clear that an accelerating number of users are awakening to the benefits of Amplenote and our Idea Execution Funnel﻿. If you haven't already consider inviting a friend﻿ or two? With "real life" resuming for most of us after two years locked inside, there's never been a better time to try out a more organized and productive version of yourself. Thank you for your support!