Thanks to the growing numbers who have managed to find us and contribute 2c to our leaderboard﻿! Since launching the Unified Task List﻿ a couple weeks ago, let's catch up on what we've been up to since.

Are you using Bear, Obsidian, or any other the numerous note taking apps that export to markdown? Previously Amplenote has offered note importing only for Evernote and Roam users﻿. As of today's deploy, there's a new importer in town, and it's the boringest of them all, see?

We've also added progress bars during import so you can decide whether to sit around and wait or come back later.

Other notes for Bear importers﻿. Our pledge to exporters﻿.

A common request from the second brain crowd is the ability to highlight text that one wants to capture while reading. In Amplenote, this can now be invoked using the extended markdown syntax for it, ^highlight^, or by selecting the text and pressing Ctrl-H on PC or CMD-H on macOS.

You can now use the group=archived query param (or enter group:archived in search input) to see all of your notes that have gotten archived (haven't been opened in a month).

Opening an archived notes will automatically de-archive it such that we cache the note's content for faster load and offline use.

And you can now use the group=untagged query param to see which of your notes in your search query have not yet had a tag applied to them. 🥂 to the completionists among you.

We've had to push back our fully drag-and-drop calendar intended to launch Summer 2020. It hasn't felt like a failure though -- it has felt like a rush of fresh air pushing back our best laid plans... a bit. The number of smart suggestions﻿ we're seeing lets us capture low-hanging fruit to make customer lives better. Full 2-way sync calendar will have to chill for a few.

The latest fast-moving feature that customers drove up the voting board in a couple weeks time? Daily Notes﻿. In candor, figuring out how to translate the idea to Amplenote context was tough at first. We knew we we didn't want to bring along the warts of Roam's Daily Notes, like their infinite autoscroll sans scrollbar﻿. What essence of the "Daily Notes" experience had made it compelling enough to collect so many upvotes?

After a few brainstorming sessions, we came to believe that the allure of Daily Notes lie in its immediacy. Stepping back, Daily Notes are a partial solution to a much bigger problem: that quick idea capture is still a pain in the ass. Before a user can write a single word in any fancy note taking app, they're subjected to all sorts of busywork (read in nagging voice): what title to give the note? Where to file it in the hierarchy? What emoji best represents the content I will write?﻿ Casual notetakers would rejoice if they never had to think about these questions ever again. Thus the reason Apple Notes, Google Keep and their ilk are still the most popular choice for the general public.

So, instead of hashing out a Daily Notes clone, we're going to tackle the problem of "easier idea capture" head on. We're adding a new section dedicated to idea capture. It will precede "Notes" in the sidebar and shall be known as "Jots." Here's how we think about how Jots fits into the bigger picture:

Notes: refined ideas and research. Ideally connected into a network with other notes and/or tagged. Precursor to Tasks.

Tasks: action items, that may or may not recur﻿, derived from refined ideas and research. Precursor to Calendar.

Calendar: how things get done predictably, even at Musk-scale﻿. The precursor to realized goals, value alignment, and improved financial results. 💵 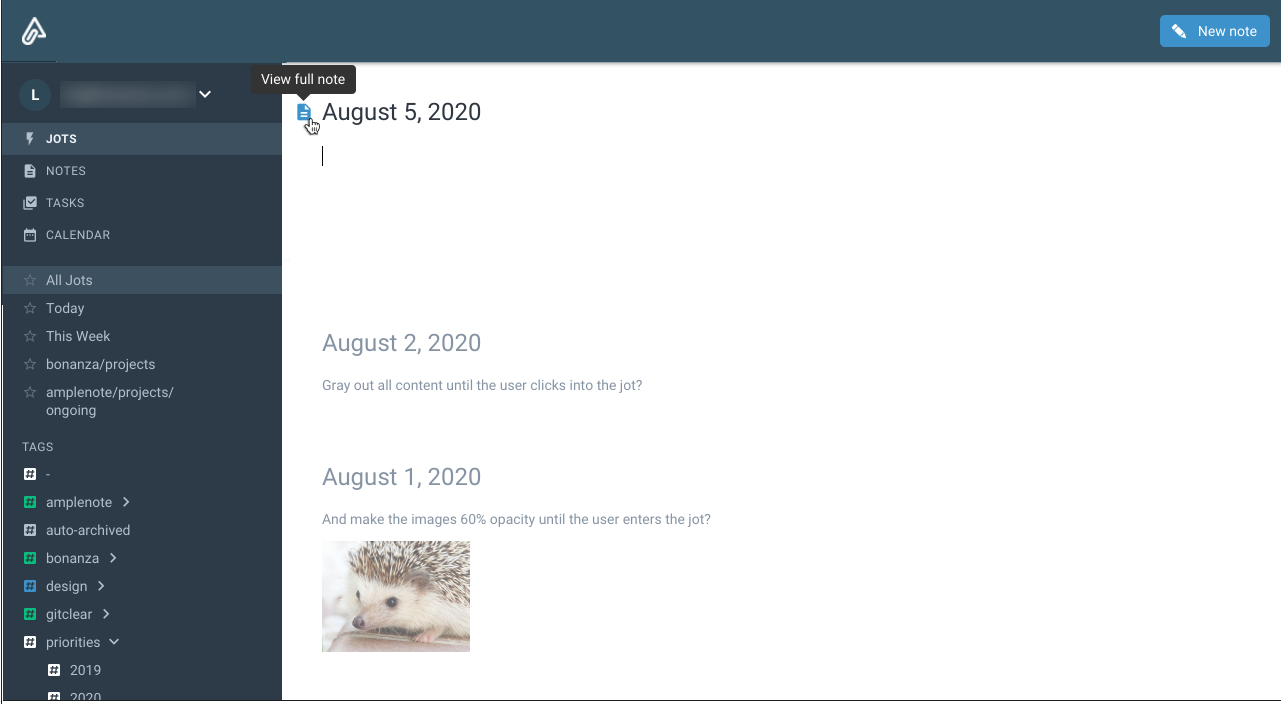 Work-in-progress design on the new Amplenote sidebar including Jots

By the end of this year, Amplenote will be the only (thus best! 🤩) app that takes users through the entire process: from idea (Jot), to refined idea (Note), to specific objective (Task), and finally, to scheduled->completed event (Calendar). Plus we'll help keep it all organized﻿ and automatically sort by what you previously indicated was important. Pretty cool?

All of this is going to take awhile to play out. But "awhile" in Amplenote time passes fast. For Founder-level subscribers, we're hoping to have the beta version of Jots available by early next week. 😅 For general release, including an overhaul of our left sidebar, maybe later this month?

We'll keep you posted how it's going on Twitter﻿! Thanks for your continued support of Amplenote, and maybe tell your friends if you like what we're up to? 🙏