Our most popular feature request﻿, Unified Task List, is being rolled out this week and next. This feature is built to wrangle hundreds or thousands of tasks you accumulate across work, hobbies, etc, and help you pick which one to work on now.

Here is a three minute video showing how it can be used﻿.

The kernel of the idea is that any note in Amplenote can have one or more tag hierarchies associated with it. For example, the note you are currently reading (which happens to masquerade as a blog post﻿) is tagged with amplenote/blog in my notebook. Thus, immediate access to edit all past Amplenote blogs by navigating to amplenote -> blog in the tag hierarchy: 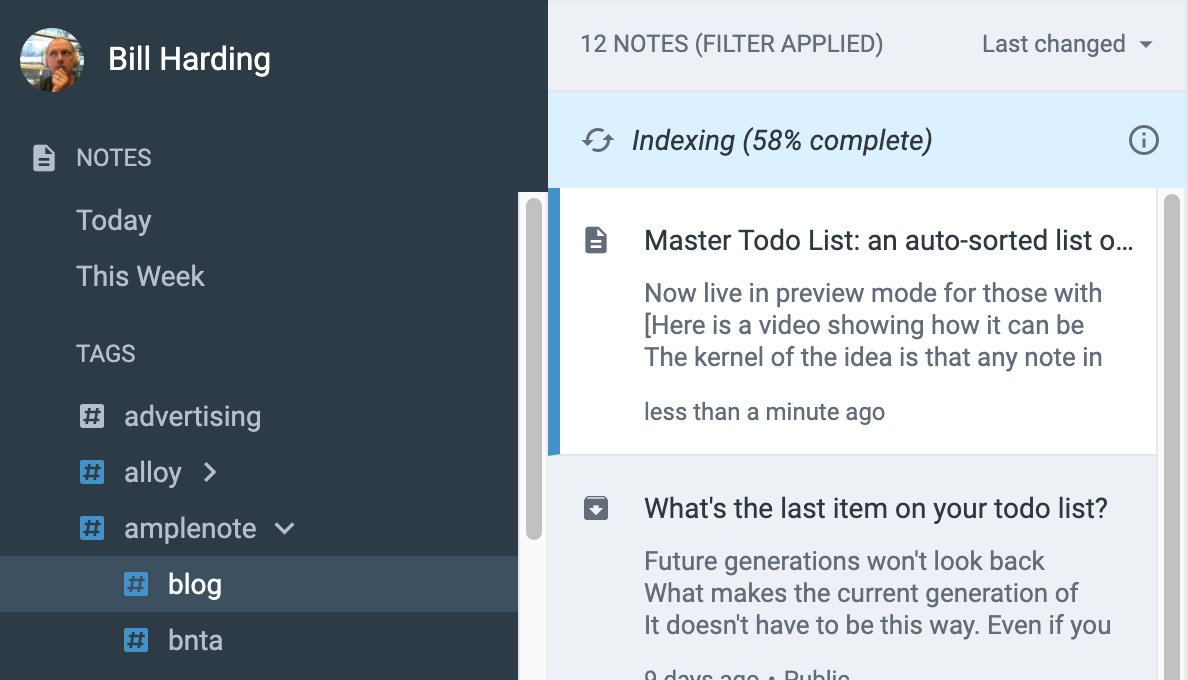 There's a reason that tags are a cornerstone of the Zettelkasten method (Amplenote is the only app that supports all Zettelkasten﻿ concepts on both web+mobile). They are the best way to precisely arrange your mental map in a way that is terse, consistent, and adaptable.

With the launch of Unified Task List, tags now take on a new dimension of utility: a path to access﻿ your pending tasks, regardless of which notes they're kept in:

Surfing the tags toward the tasks appropriate to one's context

Of course, everyone is going to have their own opinion about how they want a list of 1,000 tasks sorted, so we offer the following v1 options to impose order upon your list:

Looks like after I finish this blog it'll be only 2,224 tasks left until retirement 😏

Given the scope of what Amplenote is looking to accomplish﻿, there's a high bar for any new feature to get implemented. We favor features that are on the user voting board, and features that are combinatorial or otherwise high leverage. Unified Task List is a ✅ on all the important fronts we try to hit with a new feature.

We also allow users to create filters on the particular tag hierarchies (however deeply nested) that they use most often. 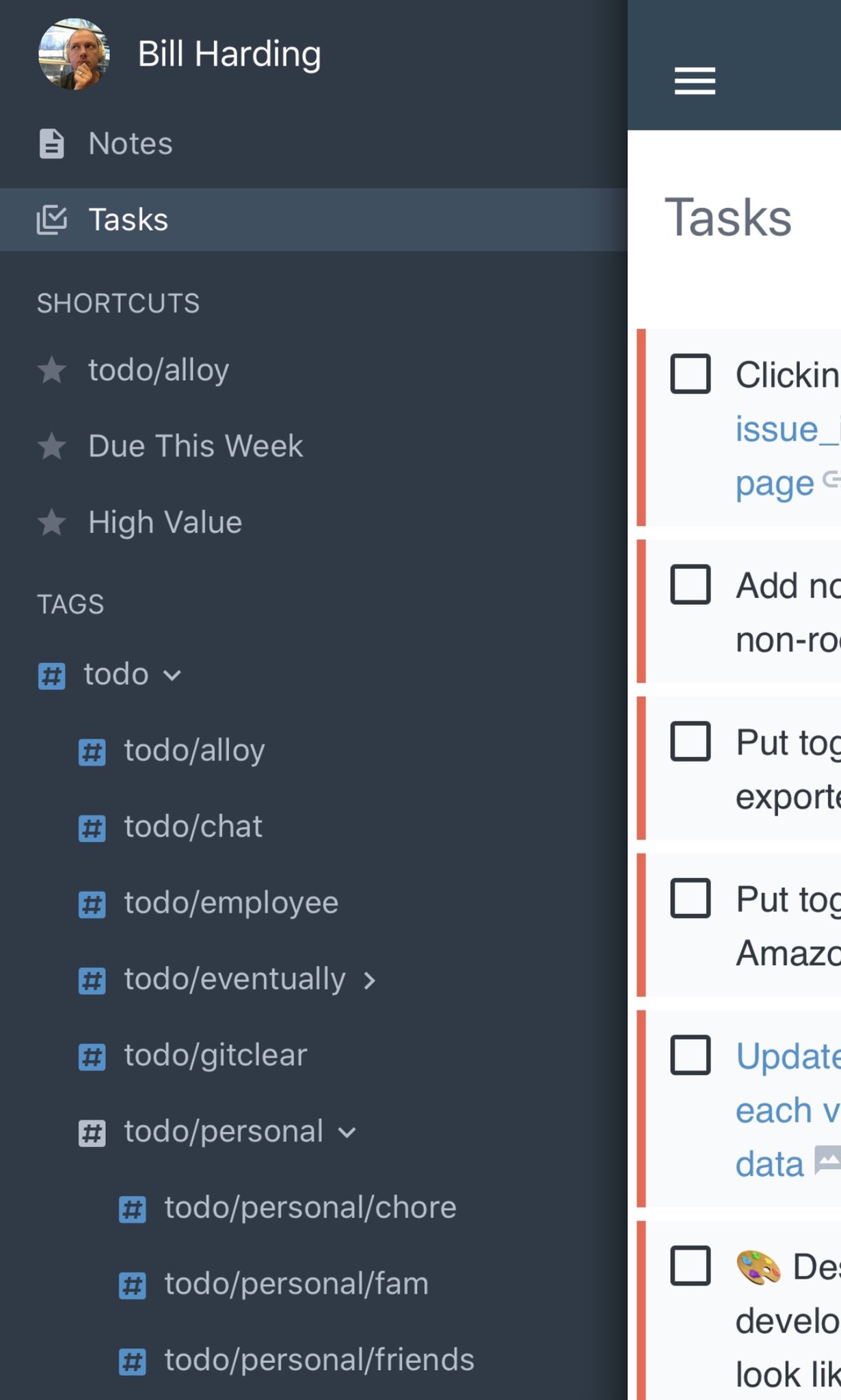 Here's how it looks on an iPhone

Some of the popular buckets that list-makers build tags around include: work, family, errands, community, and hobbies. Now you can collect tags like these atop your Unified Task List, by marking them as "starred" after navigating to them. This allows you to pull the tags from whatever position within their hierarchy, so they become available for immediate access atop the "Tasks" navigation structure: 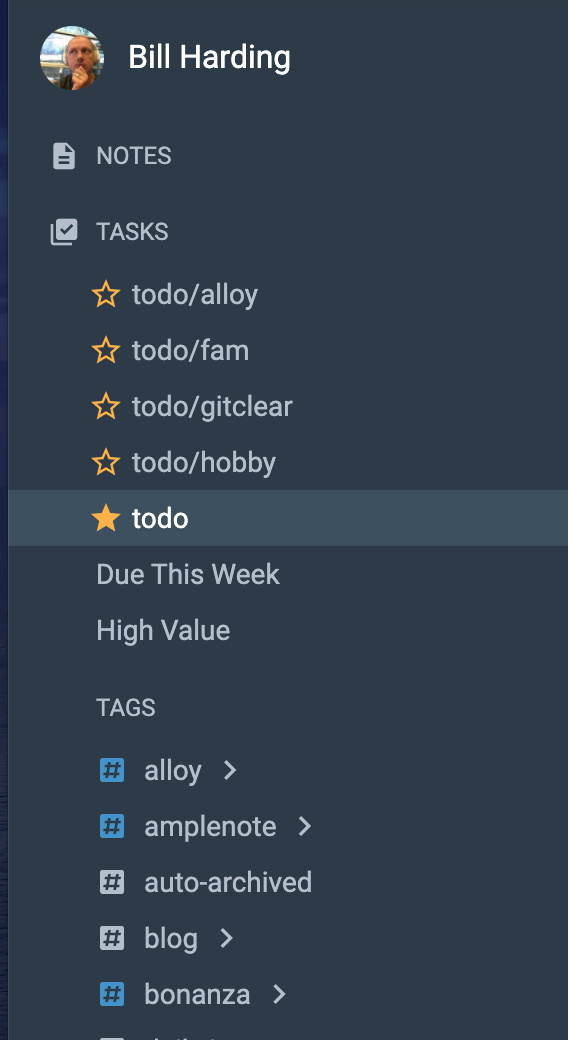 To designate a tag as a Shortcut, click its empty star to the left of the tag name﻿. To make the tag your default area of focus, click its star in the left side nav﻿. Then, whenever you open Tasks, you'll begin on that set of tasks.

Going to be fun to see what people do with so many new toys!

When hierarchies are sorted up﻿ or sorted down﻿ in a list, all of the descendants come along for the ride

When a reference is made within in a hierarchy, all descendants will be included in the backreference

We've also added the ability to hold shift while clicking a tag to see the intersection of tasks that share both tags: 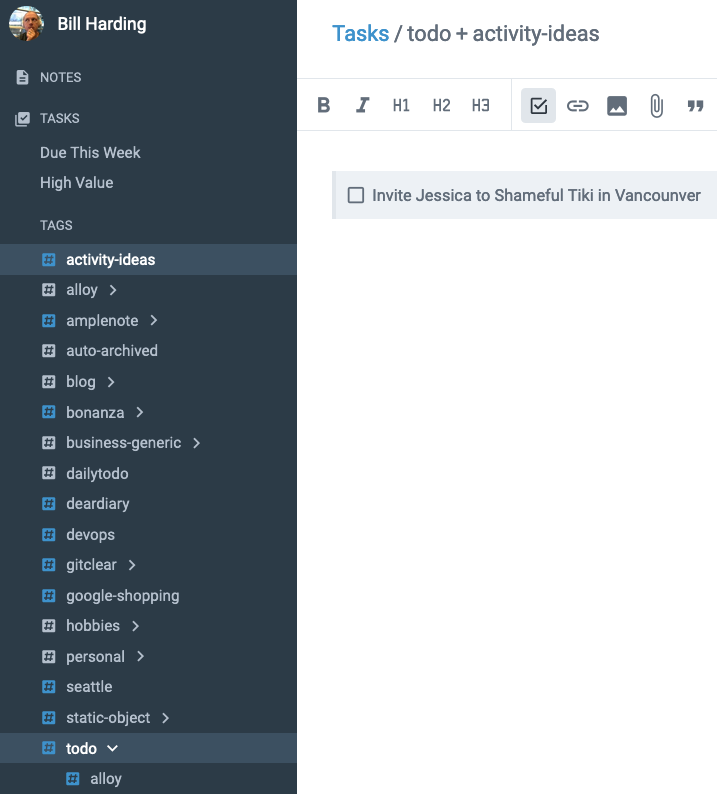 Clicking "todo," then holding shift and clicking "activity-ideas" shows tasks in notes that possess both tags

Customers with Founder-level subscription﻿ already have access to these delights in their current beta state. We're aiming to launch unified list across the app on Monday, July 20. 🚀