Our team was more than a little surprised to hear that the original giant of note taking had, as an aviator would say, "completed its descent"... 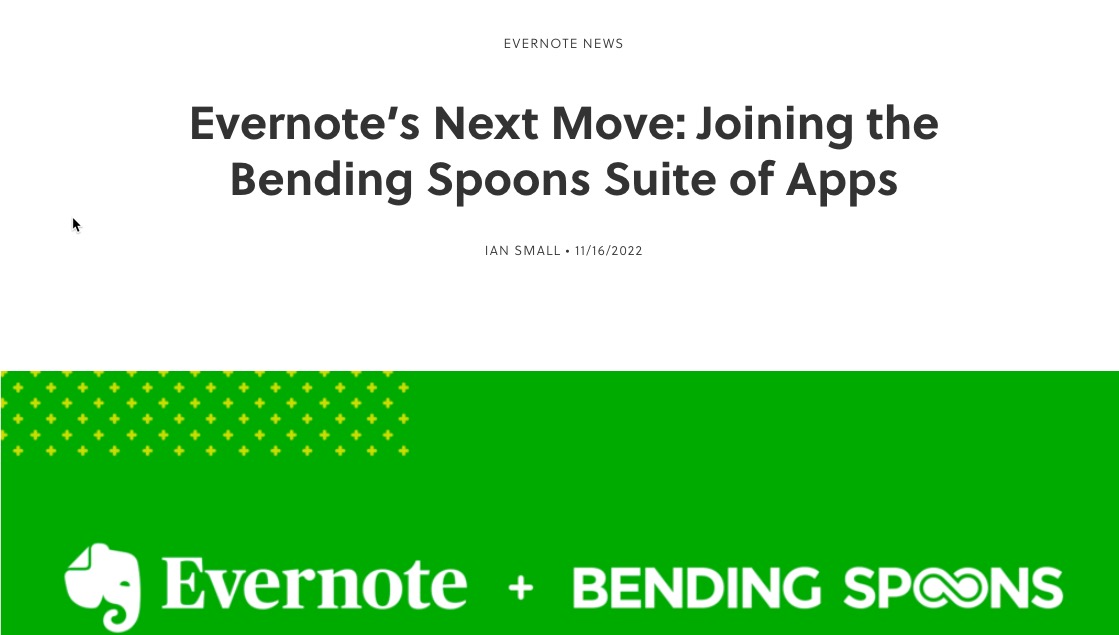 If you're an Evernote user that was already weary after going through the recent desktop app overhaul, this stings. It suggests that the future of the Evernote desktop app is more uncertain than ever. Might it finally be time to move on from the once-trusty elephant?

Here are five reasons that this Evernote users who are ready for a more modern note taking alternative will find a stable, long-term home﻿ with Amplenote:

📁 Import (most) all your current Evernote content: notes, images, tasks, tags, and more﻿

💸 Try Amplenote Unlimited: 50% off your first payment for those who import from Evernote﻿

link🎁 Our offer to Evernote refugees 🎁

To say that Amplenote's original design was inspired by classic Evernote would be putting it lightly. During Evernote's heyday, our team were regular users of what was then a market-leading product. Amplenote concepts like "tags" and our "note list" will both feel very familiar to incoming Evernote users.

In fact, as you'll see in #2 below, Amplenote is probably more similar to Evernote than either of the other two most-respected note apps being used in 2022. But I digress. Here are the top 5 reasons that Amplenote can be a satisfying upgrade for users coming from Evernote:

Our guide for "Importing from Evernote" describes in detail how to get your import underway﻿. We've spent years implementing and refining our Evernote importer to make the migration from Evernote to Amplenote as smooth as can be.

NoteApps.info﻿ keeps updated feature lists for about 30 of the most popular note taking apps, including Amplenote, Evernote, Notion, and others. The site allows you to directly compare apps based upon their features, which can be very handy when you have specific features vital to your use cases. Here is how Evernote compares to the other best note taking apps of 2022/2023:

The definition of "a feature" is inherently subjective, so this isn't a hard proof that Amplenote is more similar to Evernote than any other app. Still, it shows that, relatively speaking, Amplenote has as strong a case as any to be considered the natural successor to the Evernote legacy.

This video by Shu Omi﻿ summarizes how powerful Amplenote can be as tool for tasks and calendar. Evernote began to realize the value of offering first-class tasks in the past couple years, but Amplenote has been leading the charge on tasks & calendar integration since the day we started building. 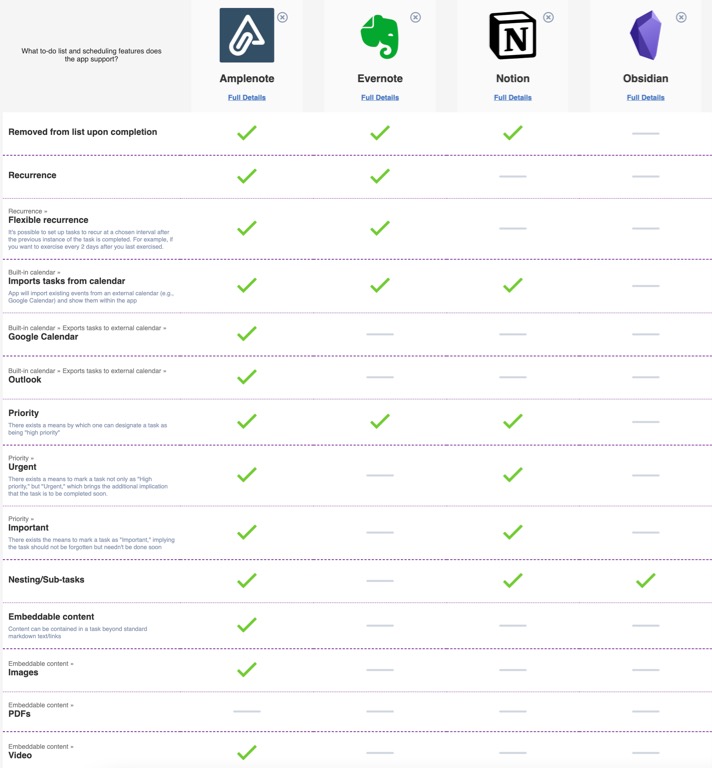 Among the top tier note taking apps in use today, Amplenote has spent more time polishing our tasks integration than any other. Evernote users who utilized their new tasks improvements will feel at home in Amplenote.

Amplenote v1 tables launched a few weeks ago﻿, and we've continued making rapid progress on our table implementation in the weeks since. Amplenote tables will support most or all of the functionality that Evernote offered.

The screenshot above shows a few of the features we're cooking up in our table implementation, including 1) embed images, videos, code blocks, emojis and much more 2) align cells 3) control background/foreground text coloring 4) adjust column size and 5) Set optional cell borders. We also offer hotkeys that make it easy to shuffle around rows and columns, and our forthcoming implementation is slated to further offer row sorting and rudimentary table formulas. 🚀 Tables are already available to Founder subscribers or those who paste tables from other apps. Within the next few weeks, robust table support will become available to all Amplenote customers.

link💸 5. Import from Evernote before Nov 30 and get 50% off your first Amplenote payment

We know that switching note apps is no small matter! That's why, starting today, we are offering 50% off your first payment for Amplenote when you import an Evernote notebook before November 30, 2022.

Redeeming this offer is as simple as:

Sign up for Amplenote via our desktop website. This offer is not available to those who initiate their Amplenote subscription via the iOS or Play Store﻿.

If you decide to sign up for Amplenote after your 2 week trial, your first payment will be discounted by 50% at checkout. If you sign up for an annual Unlimited subscription, this discount will save you $60 in your first year (!).

Also worth mentioning: Amplenote offers one of the most generous "Forever Free" plan among any apps﻿. Even if you decide not to become a paying Amplenote subscriber, you can switch to our "Personal" plan and still use Amplenote with unlimited notes, across unlimited devices.

Give us a try and let us know what you think? We ❤️ feedback, whether in blog comments or submitted directly to our roadmap﻿.