Suddenly it feels like we've got a lot more responsibility to live up to! Prominent Youtube productivity app reviewer Shu Omi took a look at Amplenote in a 17 minute video﻿ that declared Amplenote "the best note taking app I've seen for turning ideas into actions." It's an exciting statement for us to hear from somebody so well-versed in Notion, Roam, and the rest of the note taking app ecosystem.

Shu does a much more precise job of explaining the Idea Execution Funnel than our previous blog post about it﻿. If you want to understand what Amplenote is working to achieve, don't read our long-winded post, just watch Shu's explanation at 0:41﻿. 😂

Since we've already broken our previous one-day record for new signups, this seems like an opportune time to give a brief summary of where Amplenote is at in development, and what's coming down the pipeline in the next few months.

The most foundational element of our strategy is to build for the long-term. We acknowledge that, compared to other apps, we've put virtually no effort toward making it easy for customers to discover us. For us to succeed while doing so poorly at self-promotion, we need the product to speak for itself. It must continually surprise and delight new users.

From a product development standpoint, the consequence is that we proceed methodically. There are a lot of incredibly exciting ideas on our feature leaderboard﻿, but we don't want to take on any new feature until we can describe how it connects to our existing features, and write tests for it. We try to differentiate in part by offering a stable, intuitive, and relatively bug-free product. In the long-term, growing slower gives us time to build upon a solid foundation.

Our parent company, Alloy﻿, has been around for 13 years now. Amplenote launched in 2019 after a couple years of internal dogfooding. Everything that our company builds is created with an eye toward the long-term, because we don't have VCs forcing us to abide the traditional "grow fast or die" model. As long as we build a product that helps customers get more done than ever before, we'll eventually win. It can't possibly be that hard, hopefully..? 😅

Ok, it might be kind of hard to build the perfect app to combine tasks and todos. But we're patient and we've got a great compass﻿.

Philosophizing aside, this is going to be a hell of a quarter.

Our first order of business in the new year is to get started on our long-teased calendar﻿, in hopes to get it launched across platforms by the end of Q1. While we already offer the capacity to connect to Google Calendar or Outlook﻿, it's going to be a game changer to drag-and-drop one's day into place. So we'll start there. Those with a Founder-level plan can expect early access a month or two before the general release.

The second order of business is Amplecap. We've teased this extension on Twitter, but it seems likely that by this January we'll offer a much-improved extension that takes the best of Evernote Web Clipper and similar tools: 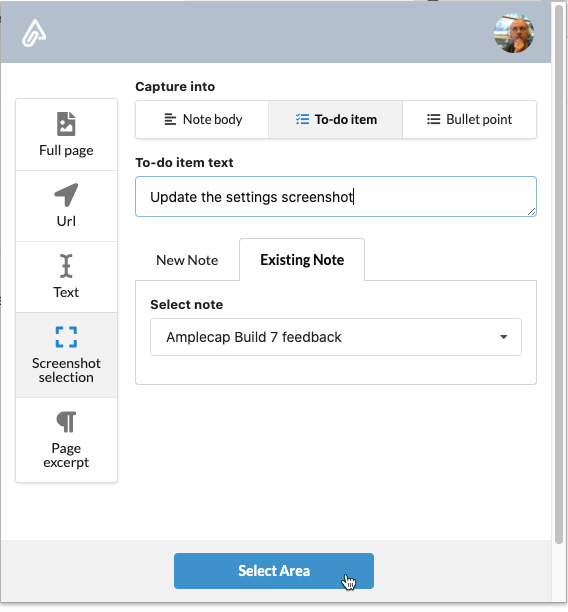 The third order of business is the second note window. It has been our most-voted feature for a couple months now, so we expect to tackle this concurrently with the calendar and Amplecap. Hard to have a confident estimate on when this will become available, but it's not rocket science. If it's not done by the end of Q1, we suck.

Finally, the area that has been most top-of-mind for me personally has been better task completion stats. Since we let people create tasks from so many different modes, it isn't always easy to get a sense for how many tasks are getting done on the whole, and how that's changing over time. Our "Completed tasks﻿" line graph is a small step in the right direction -- small being the operative word, since the thing is less than 100 pixels tall. We can do better. If you preface your tasks with emojis﻿, in the future you can expect to see details on which types of tasks you're making the most progress on, where your Important tasks have been happening, and how much Important vs Urgent work you've gotten into lately.

link🐛 Best articles to catch up with

For those who are new to Amplenote, it might feel like there's a lot to catch up on. Here are a few of the highest bang-per-buck articles we recommend to get started:

Amplenote: the note taking app to kick up your 2021 productivity﻿

Writing in 3d: how the writing method impacts thinking﻿

Brush off your barnacles﻿