Future generations won't look back kindly on what 2020 considered to be great todo list options. The evidence lies in the "nether regions" of the todo list -- that final 5-10% where unpleasant tasks loiter like teenagers once did at the mall. If you experience continued difficulty finishing your last few tasks, you have an opportunity waiting to be seized.

What makes the current generation of todo lists so bad? In a nutshell, everything﻿. Most damningly, they draw failure out of those with good intent, sapping the willpower of determined practitioners. As a group, todo list users possess impressive reserves of energy, discipline, even intermittent willpower. And yet, todo lists are constantly aborted as they eke toward their natural final state: a sad chronicle of broken intentions.

It doesn't have to be this way. Even if you don't use Amplenote, you can use the ideas in this article to multiply your productive output. The first step is to identify & set aside what is broken with your current todo list. The second step is to lend your future self a hand. Finally, a great todo list system needs to proactively help you identify what to discard. The possible upside? That you can juggle 10x more possible tasks (💡🚀📈) while keeping a shorter visible list and using less brainpower overall. It starts by tossing out everything that sucks about classic todo lists.

linkThe problem with a classic todo list is everything

Both data﻿ and intuition agree: humans are ill-equipped to process the 21st century-volume﻿ of distraction. The todo list seems like the perfect opportunity to sift through the multitude of signals we have bombarding us. Using a system like GTD, one captures their deluge of incoming tasks in a todo list, where it's poised to get done.

And yet... after "task capture," every aspect of getting things done is a struggle with classic todo lists:

🗓️ When to work on it? It's one thing to know that X ought to get done. It's another thing to figure out when to do X. There's always something more recent (easily mistaken for urgent) to tend to.

🗄️ Where to put it? Life does not take place on a single axis. At any given time, we're juggling ambitions that span career, family, hobbies, community, etc. How to translate a many-dimensional life to a single-dimensional calendar (where the task gets done)?

🥇 How should its relative priority be decided? In a classic todo list, it's unclear what to start on today. The longer the list, the more time it takes to consider each task's merits and pick a winner﻿.

And perhaps most importantly...

🗑️ When to give up on it? The accumulation of no-longer-relevant "barnacle tasks﻿" from months past are the leading source of giving up on a todo list altogether. The classic todo list only metastasizes with time.

"Todo lists" promised a tool purpose-built to capture our best ideas so they'd get done. What we got was irrelevant calendar nags, and grounds to question the tenacity of our character. Not cool, list, not cool.

While the impotence of todo lists is problematic, there's enough blame left over to share some with the user. The most common problem with todo list users? Our﻿ ongoing refusal to pick apart what is "important" or "urgent" from what is merely "recent." Many todo list apps offer a single "Starred" or "Priority" designation for tasks that conflates the three concepts, making things worse. This matters when considering how a classic todo list accumulates garbage over time: 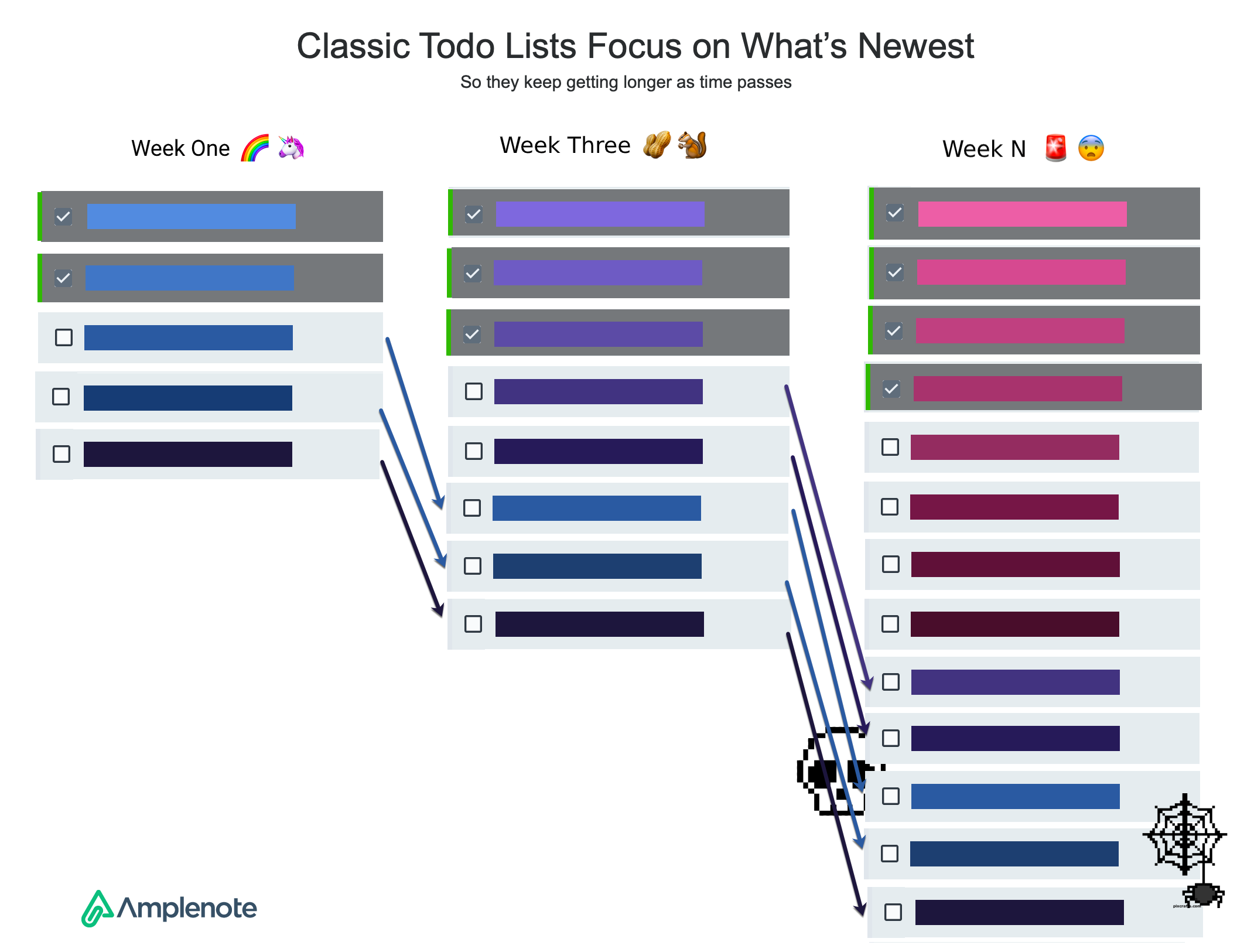 One week at a time, classic todo lists sap their creator's gumption by accumulating cruft without helping to clean out the garbage. The more guilt fuels your productivity, the more Week N hurts

The promise of a todo list is that it will tame the overstimulated world modern humans navigate. Yet, the more a todo list is used, the more exhausting it becomes. Consider the visualization above: are the blue, purple, or red tasks deserving of attention on Week N? Without a compass to guide focus, the oldest tasks sink to the bottom, making it ever-more unpleasant to visit the nether regions of your todo list.

Our modest proposal is that users do a favor to Future You and consider whether that newly added task is important, urgent or just new? Here is how we characterize the difference between the three:

An "important" task is one where the task objective is aligned with a personal/business goal.

An "urgent" task is one where your personal/business wellbeing depends on some task being completed within the next day or three.

A "new" task is one where it was added recently.

Squint closely and you might see why we prefer to work on tasks that are important, urgent, and recent, in that order. 🧐

In the context of our evolutionary history, it's forgivable that we instinctively mix up "recency" and "urgency." What's less acceptable is that we keep making the same damn mistake, day after day. Here is an experiment for current todo list users to try: make yourself wait as long as possible (ideally 1-2+ days) before taking up a newly added task. You can experience firsthand how clarifying and unsatisfying it is to escape the clutches of recency-based list sorting. The "unsatisfying" feeling of abstaining from shiny new tasks proves that you're not just working on this because it's going to be fun 🤡. You're working on it because, after considering it relative to other opportunities, it is best aligned with your goals. In the Amplenote world, we would label that task "Important﻿."

Future You is capable of great things if given the chance! They are a chronically underutilized resource when it comes to sifting your opportunities and detecting which continue to matter over time. Repeatedly relevant tasks are often the most promising sort -- and they have a way of slowly improving (with #showerthoughts or your equivalent) as the weeks pass.

To benefit from the splendors of Future You requires establishing a channel of communication between your present & future self. That "channel of communication" is an organized todo list. As with the depiction above, we see new tasks being added each week, mingling with the preexisting tasks. But this time, the user has been kind enough to Future Them to ascribe more detail about each task as it's added. Given these details, a better todo list can steer tasks into or out of the user's attention as weeks pass: 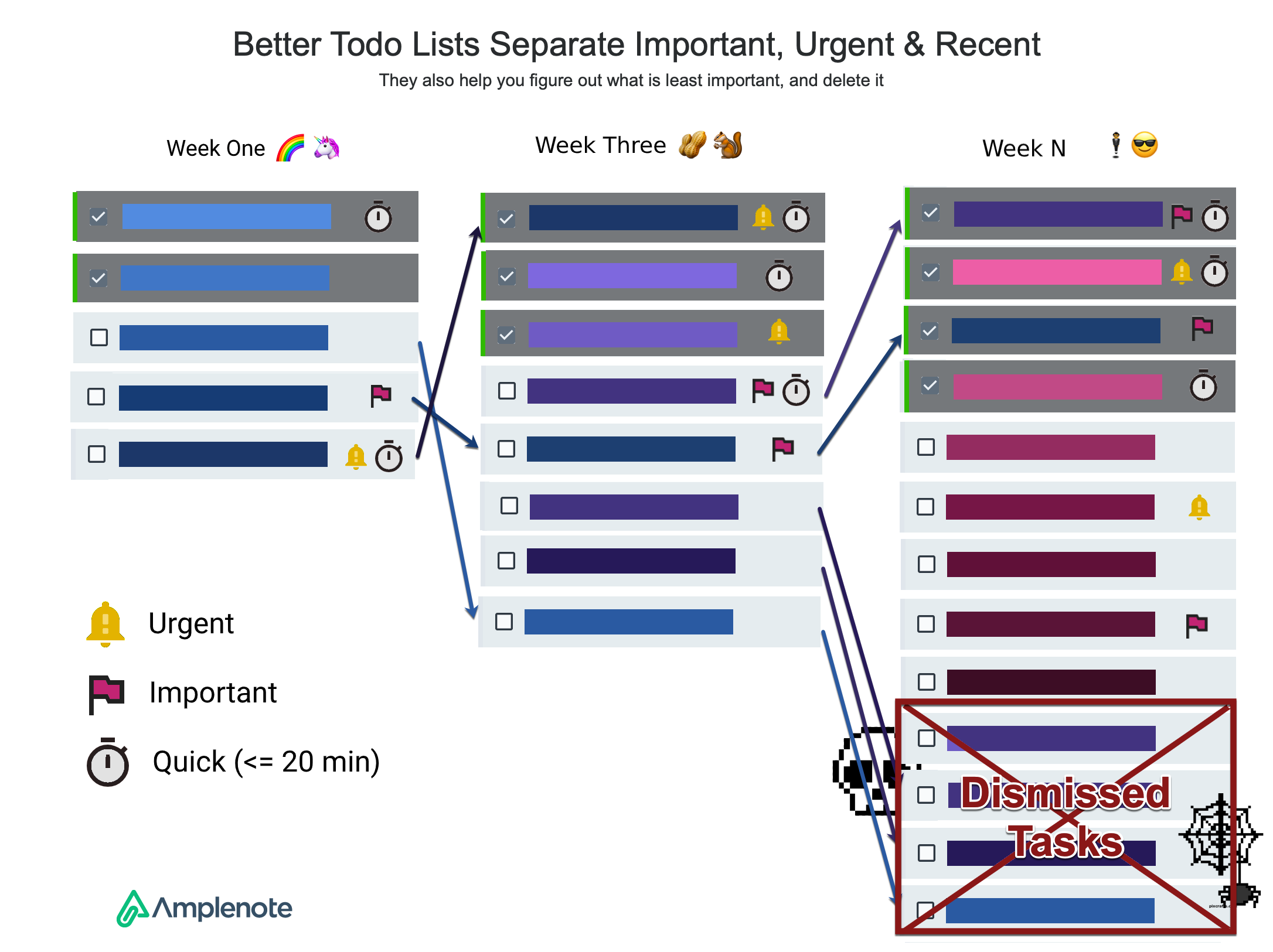 A little bit of labeling goes a long way toward working on more meaningful tasks. The movement of tasks up and down the list simulates how Amplenote shifts your tasks if you provide input

You can keep a long todo list, but we recommend instead a list where it's easy to snooze or trash tasks﻿. You want to keep your list as tight as possible. When you let a new task linger on your list for a week or two before taking it up, you open a portal to receive the assistance of Future You.

If you're a creative person with lots of ideas, Future You is a ready & willing judge to help spot the pick of the litter. The best versions of your best ideas take time to refine. The longer an idea sits on your list (hidden or otherwise), the greater the opportunity for various Future Yous to discard the idea or improve it. The more times you're willing to be entertained by a task, the more important you can infer it to be.

linkExpert's corner: escaping from the tyranny of urgency

So far we've proposed a system that can help a user lift themselves out from a recency-based mindset. That's a great first step! The natural power-up goal is to become "more free," aka "less driven by urgent tasks." In an article called "The Procrastination Matrix﻿," Tim Urban (waitbutwhy﻿) proposes a simple method to interpret what should happen to important, urgent, and other tasks: 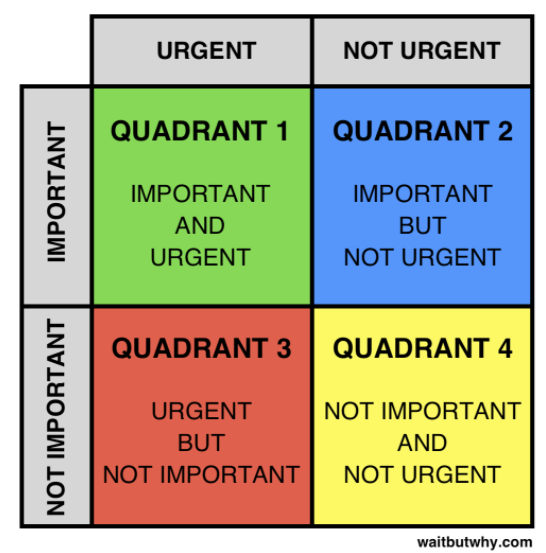 Its staying power stems from simplicity and versatility. Its simplicity means anyone can judge whether a prospective task is urgent, important, neither, or both. Its versatility allows it to be applied to any career or pursuit. By applying the matrix over time, one gradually reduces the overall length of their list, while increasing the concentration of Q2 tasks. Practical freedom is setting goals and deciding when to work on them without being driven by urgent interruptions.

Just how versatile is the matrix? Consider: we're working to convince you in 2020 to adopt an idea that's at least 70 years old (Dwight D. Eisenhower, popularly known as "Ike," was president in the 1950s). Ike's problems leading the United States through the red scare are a lot different than my problems balancing programming, writing, and exercise. No matter, the matrix helps calibrate priorities for either. As "foundational organizing principles" go, it's nice to have 70 years of real world vetting as the starting point.

This is not to say that the classic Eisenhower Matrix is the perfect tool to organize your life. Far from it -- by default, the matrix is completely impractical. Its many shortcomings quickly become apparent when applied to the real world:

When "urgent" actually means "due today at 3pm." Sometimes urgent tasks come with a due date. The ideal organizing system needs to understand when a due date is involved and elevate task visibility accordingly.

Should Q4 really be trashed? Many tasks are neither urgent nor important, but still ought to get done if time allows (i.e., if it's quick). A recent example﻿.

What about task duration? What is the cost of pursuing a prospective task? If we're talking 15 minutes to complete, that should probably get done today, even if it's neither urgent nor important. If it's 15 hours, that's different.

While the Eisenhower Matrix isn't fit for consumption out of the box, it's a well-tested prototype for identifying which of your tasks should rise or fall over time.

For those who seek help escaping a recency- or urgency-driven life, Amplenote warrants consideration. We provide a mini-Eisenhower Matrix﻿ baked into every task you create. It gently surfaces the most relevant tasks as time passes. We also provide the means to estimate the task's time (i.e., its cost), so your list doesn't grow cluttered with trifling affairs. Finally, we integrate with both Google Calendar and Outlook﻿, so when you're ready to set a starting time for your task, you can schedule it from within your note. Soon, we'll allow fully synced drag-and-drop task scheduling between your note(s) and calendar(s).

"Task Score" is the unit that we use to make sense of complex, overlapping opportunities that might span multiple to-do lists﻿. Each task can have different properties assigned, which cause Task Score to accumulate at varying rates, so Future You sees the most relevant tasks first:

We also support backlinking/bidirectional linking﻿, and by extension, the Zettelkasten method﻿ currently popular among Roam users﻿. Amplenote is available as an installable app﻿ on macOS, Linux, and Windows. We're also in both app stores. 📱👍

Give us a shot﻿? No credit card required.